I love love love a piece of good bread with jam in the mornings with coffee. I recently decided to take a bit of the pumpkin puree I made and turn it into some lovin’ for my toast. It’s incredibly easy and super tasty. I’m sure there are some recipes online but I just freestyled it. I really need to replenish my fall spices, but what I had on hand worked fine.

3-4 frozen pumpkin “pucks” (roughly 1 1/2-2 cups)
Cinnamon, nutmeg, cardamom to taste. Allspice would be a good addition too.
Maple syrup to taste
1 tablespoon good butter (like Plugra)
A bit of confectioner’s sugar if it seems too thin

Defrost pumpkin, strain if it seems watery. Add spices, syrup, butter. Add powdered sugar until it is a good consistency. Refrigerate and use within a week or so. 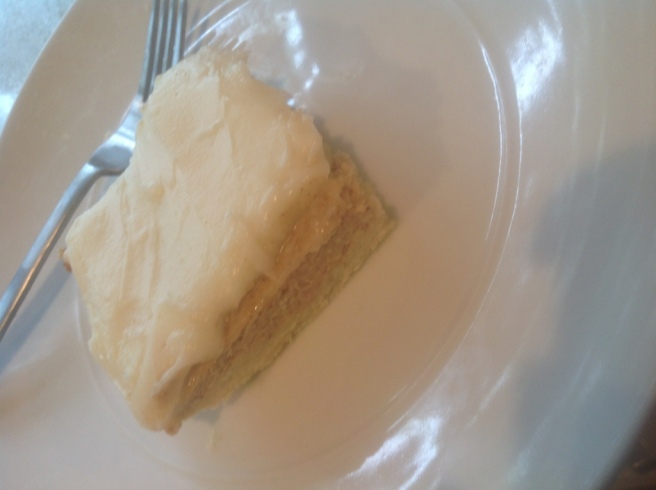 This recipe helped me to jump-start my fall baking. I bought my first two pie pumpkins and located my pie weights. That alone made me feel triumphant. The bars are really yummy, the perfect thing to make for a holiday potluck…(or in this case, a random rainy weekend)

The only problem with it is that it is NOT procrastinator-friendly, it definitely takes a bit of time and planning to execute this recipe. Luckily we were just having a lazy weekend at home so while the boys snuggled on the couch watching Winnie the Pooh I spent some time in the kitchen.

By the time we were finished having breakfast this morning (ok, I’m still in my jammies drinking coffee, but it’s technically not the morning anymore) the bars were ready to be cut.

I definitely think they were a hit. I don’t need a pan of these laying around my house, so I think I am going to pack up most of them and send them with my oldest boy to take to his Nana’s house.

Go see how my tester friends fared with these yummy autumn treats!

Next up: Devil Dogs with Malted Buttercream Filling. WOW! 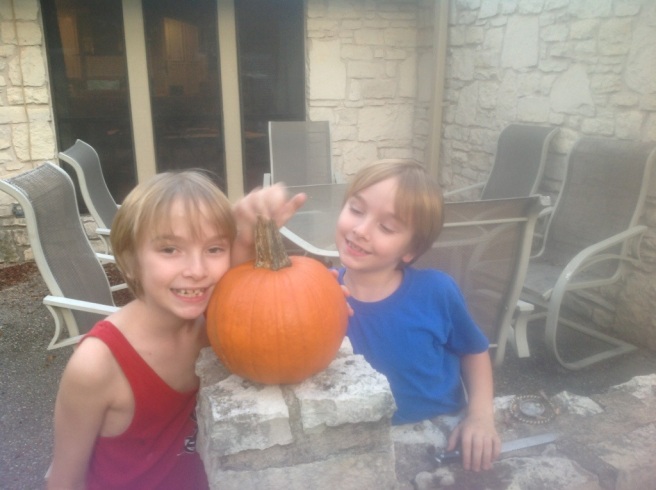 It’s finally fall(ish) and our first pumpkin of the season went into the oven. I haven’t used canned pumpkin in many years. I had once figured fresh was a pain, or wouldn’t taste right or would be expensive. Not only is that just not true (one good-sized pie pumpkin can bake three-four pies) but fresh just tastes better and isn’t artificially orange. (fresh pumpkin bakes up brown, an orange pie or other baked good is a surefire canned giveaway) 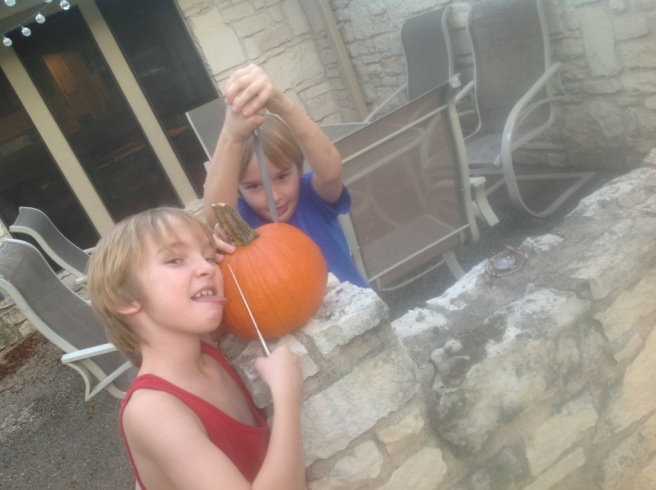 Baked Elements has instructions for making pumpkin puree from a fresh pumpkin, but I didn’t use directions since I have done it lots of times before. I just poke holes (or employ two stabby 8 year to do the job) and put the pumpkin on a parchment-lined cookie sheet and bake on 225 and go do other things.

This time I started in the evening and by the time it was done (a fork will pierce the skin very easily) it was bedtime so I turned the oven off and left the pumpkin to hang out in there overnight. 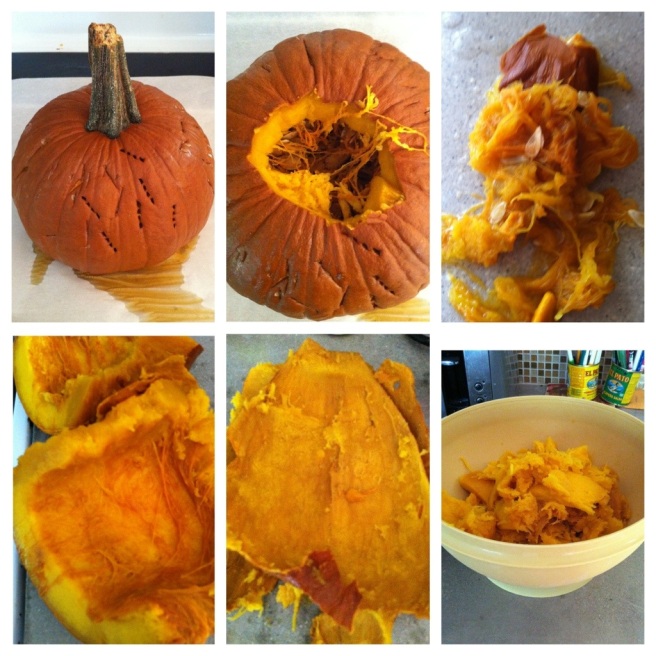 The next day I cut off the stem, reached inside and scooped out most of the guts/seeds (the fun part) then cut it into quarters. Using a fork, I gently scraped off the rest of the stringy bits and seeds Those went into a colander to be cleaned later. Using a large spoon I scooped out the flesh and scraped the skins clean.

The pumpkin chunks went into a large bowl with a lid (there are about 4-5 cups) and when I am about to use the pumpkin in a recipe I will toss a cup or so into a strainer and drain any liquid off before putting it into the food processor to blend until smooth. 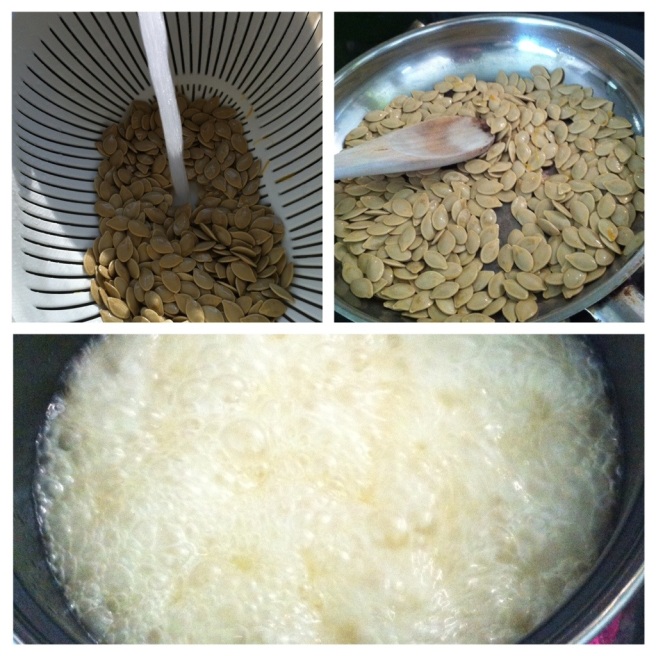 I almost always roast my seeds but this time I used the Baked Elements book and made the Toasted Pumpkin Seed Brittle.

Brittle is so so so easy, and I’m happy most people would assume it was difficult: it makes great gifts when tucked into a cute tin. This recipe is salty and sweet and cinnamon-y and makes me (and all my guys) very happy.

What side are you on? Team Canned or Team Fresh?