We have friends coming over for dinner tonight and I was lagging a bit with the dessert-making. I really had no idea what I was going to make.

That problem was solved when my sweet husband received a text letting him know that our guest thinks he might be gluten intolerant. C was making brisket tacos so corn tortilla, no big deal.

Since I hadn’t made anything yet I decided to make a flourless chocolate cake so our friend wouldn’t leave feeling stabby pains in his tummy. I think his wife will thank me later. 😉 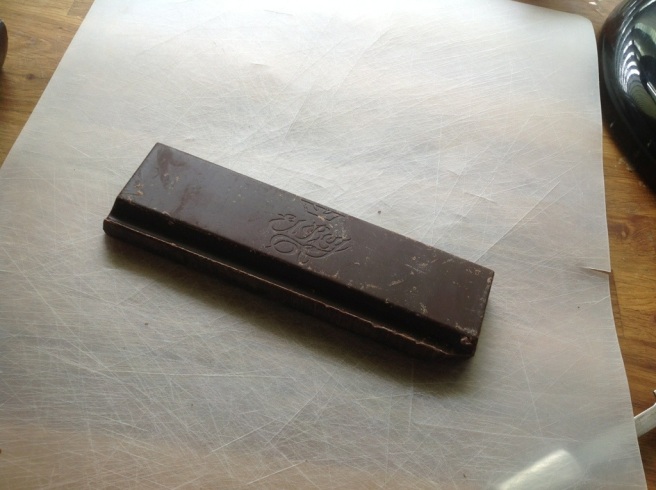 I had a nice bar of chocolate on hand so the cake was all set. I got to use an 8″ springform pan that my sweetie bought me when we first met, that I had yet to use for some reason. The batter came together well and went off into the oven while I put G down for a nap. 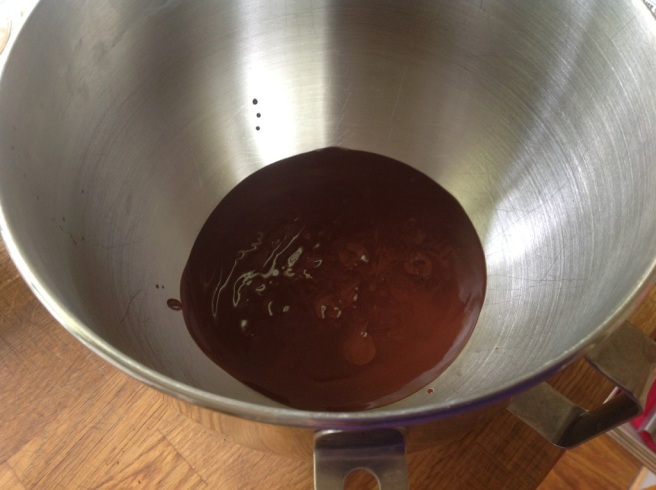 I was feeling pretty pleased with myself when I realized I had used all the chocolate and had no heavy cream. So where did that leave me in terms of the topping for the cake? Determined to not be ganache-less I scrambled to find a solution.

I still had buttermilk from last week’s cornmeal griddle cakes so I could use a recipe I found on the King Arthur website, no problem. That just left the chocolate. I thought I had read that 3 tbsp. of cocoa powder plus 1 tbsp. of shortening= 1 oz. of chocolate. That sounded gross to me, but I mixed it up, added sugar to taste and poured the heated buttermilk over it then mixed in the butter.

It looked shiny and as ganache-y as any ganache I’ve ever made and it tasted good, no weird mouthfeel like I had feared. It thickened a bit as it cooled so I frosted the cake while it was still a bit warm.

One of my favorite things about ganache is you just pour it over and it hardens to a shiny, beautiful finish. That didn’t really happen here, as it cooled it lost it’s sheen but if it ends up tasting good then that works for me.

I sprinkled some crystal-flaked salt on top and threw it on my cake stand. I’ll let you know later what the verdict was. 🙂

3 ounces (by weight) buttermilk (I used about 1/2 c)
7 ounces (by weight) semisweet or bittersweet chocolate, chopped
**since I didn’t have chocolate I used 21 tbsp unsweetened cocoa powder, 7 tbsp shortening and 1/3 c of sugar
1/2 tablespoon butter, cut into 1/8″ pieces and chilled

Ganache is traditionally made with cream, but this works and has an interesting tang to it.

Heat the buttermilk until it just starts to boil, stirring occasionally, then add the chocolate and stir until fully melted.

Strain through a fine sieve and allow to cool. (The buttermilk will curdle a bit, this removes the lumps.)

^Mine didn’t seem curdly or lumpy so I didn’t strain. Plus, I didn’t feel like it. ^

I was so pleasantly surprised to find that this cake turned out amazing. I was impressed with how yummy a flour-free dessert could be. The flakey salt on top was a MUST. A tiny piece each was plenty, it was so rich and chocolately. All the kids loved it too. This is a keeper, especially for gluten-free guests. I won’t use the shortening/cocoa powder thing next time, but in a pinch it works very, very well.

My babies spend the night at their Papa’s on Wednesdays so tonight I wanted to bake them something special to see them off to school in the morning.

I made Chocolate Hazelnut Spread as part of Baked Sunday Mornings this past weekend and I wanted to use it up. (the last thing I would want is for yummy homemade goodness to be abandoned in the depths of the fridge) My boys LOVE Nutella so I knew Nutella Scones would surely be a hit.

I have only made scones one other time–a couple of years ago I attempted fig scones. This was pre-Kitchenaid so they probably weren’t great.

Now, you don’t need a stand mixer to make scones but until I owned my stand mixer I was not really advancing in my baking craft. There is really only so much you can do without one so even though I think I’ve always been a decent baker, the Kitchenaid helped me take it to the next level.

I have no idea how these will taste (hopefully fantastic) but scones are pretty easy to make. In this case you whisk together dry ingredients and set them aside, then smoosh in cold cubed butter. Next, whisk heavy cream and one egg then add to the butter/flour mixture. The chopped hazelnuts go in last.

Once the dough can more or less stay together you turn it out onto a lightly floured surface and knead/smoosh/guide it into a roughly 12×6 rectangle. After spreading the rectangle with Nutella you roll it (I had my dough on a flexible plastic placemat so I began the roll with the sheet around it to make it easier) into a cylinder.

Form the cylinder into a slightly flattened disc then cut into 6-8 pieces.

I was excited because I got to set up another drizzle station. Once the scones are baked you put them on a cooling rack and drizzle with warm Nutella.

The hard part for me was the baking time. I underbake cookies by quite a bit and underbake cakes slightly, but it’s my understanding that a scone that is too under has more in common with a raw pancake than a gooey brownie. (yuck)

Anyway, mine are all done! I can’t wait to have one with coffee in the morning! 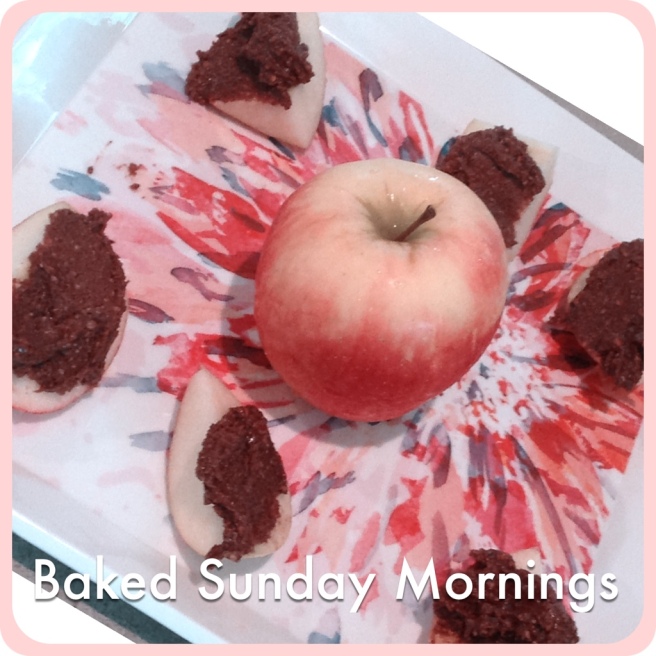 I was thrilled to make my first recipe as part of Baked Sunday Mornings. Of course last weekend I made a Lemon Drop Cake and yesterday I made the Sweet & Salty cake but this my first time following the official baking schedule.

I was relieved that it was a quick and simple recipe so I could still have lots of time to celebrate my man’s birthday. I bought raw hazelnuts from Whole Foods last week when I was shopping for good chocolate for the cake. It was hard to gauge in cups at the bulk bin so I accidentally bought $15 worth of nuts, twice as much as I needed. Now I know why Nutella is so expensive: those suckers are not cheap. But the good news is they are immensely tasty so having extra on hand is not a bad thing.

I roasted all of the nuts at once and spent the next day or so removing the skins at my leisure. I first rubbed them with a damp towel, as the recipe suggested. With the skins that remained I either slipped them off or rubbed handfuls between my hands to gently remove them. I don’t think you need to have totally naked hazelnuts, but the papery skins need to go so they don’t mess with the texture of the spread.

I am always amazed and delighted whenever whole nuts liquefy and turn to butter. However, my small 4 cup food processor was not so excited. 😦

My husband wanted to buy the big daddy when we were first looking at them but for some reason I vetoed it. Big mistake. I wasn’t too worried about it burning out but if I was I would have taken the hazelnuts out once they liquefied and mixed in the other ingredients by hand.

I didn’t do that and the motor did get a good workout. I smelled a bit of burning machinery towards the end. I won’t be sad if I’m forced to buy a bigger food processor! 😉

I didn’t use hazelnut oil, the nuts were expensive enough so I didn’t want to buy any more special ingredients. I used grapeseed oil which was fine but next time I would definitely use hazelnut oil so it could impart more warm nuttiness to the finished product.

The spread was perfect and yummy and will be happily spread on apples–done already 😉 and over toast and crackers and maybe biscuits or scones. We are definitely fans of Nutella here and homemade is even better!

See you next week!! Next up: alfajores! Don’t forget to head over and see what everyone else did this week!

It was great…the perfect cake for a big celebration. 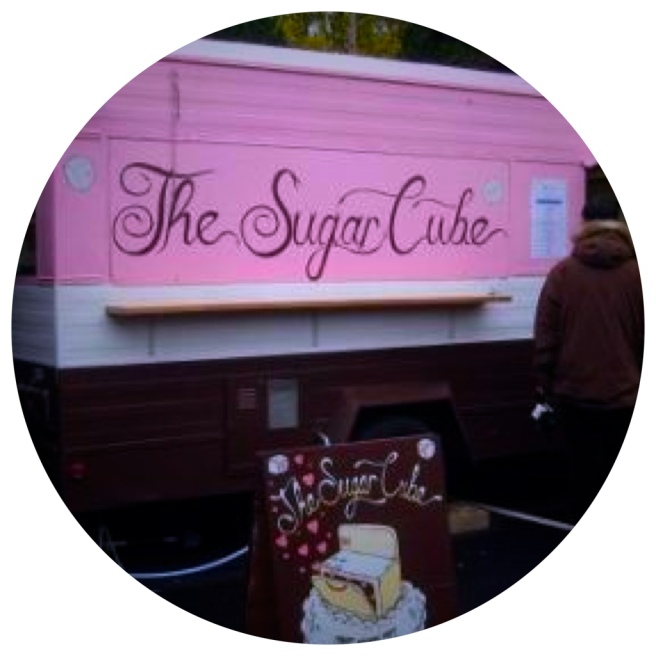 The other new cook book I purchased recently is one written by a woman in Portland who runs a food cart. I found the book at the library and had to have it. It was definitely right up my alley.

There are a million things I want to make from the book, but the first one I attempted over the weekend was the Black & White Sesame Brittle. I couldn’t find black sesame seeds so I used twice the amount of white and it was fine. I think it would look more striking with both, I’ll try to find them for next time.

I decided to make it as part of the belated-birthday gift I was taking to my boys’ Nana. There was a sesame candy I have had at her house before so I thought she might like it.

The brittle came out great but it could have gone a tiny bit longer in the pan. It was not quite the deep golden brown it should have been, but I was nervous about overcooking. It’s also not a great idea to make brittle on a humid day, which I did but a little dusting of confectioners’ sugar insured that it wouldn’t get sticky.

I tucked most of it into a round gift tin and kept the tiny bit left over in a ziploc–it’s gone already. It was a big hit in my house and Nana said she enjoyed it too. I can’t wait to try more recipes!

Have you ever made brittle before? Were you shocked at how fun and easy it is?