I have never made a soufflé. But it turns out to be the perfect recipe for procrastinators, so now it’s pretty much my favorite thing ever.

Butter and chocolate get melted together. Egg yolks and cinnamon are whisked in. Egg whites get beaten to stiff peaks and gently folded in.

My ramekins were only four ounces instead of the six listed in the recipe, but I had just enough to fill them. I liked the cinnamon-sugar coating that was added before filling, it provided a nice contrast to the deep chocolate flavor. 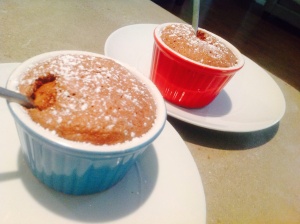 I baked mine for eight minutes and checked on them. They seemed pretty set but had not risen quite as much as I had expected. I pulled them thinking they might be ready, but dipping a spoon in showed that they weren’t quite done yet. I didn’t want to poison my children so I baked them another six minutes and they got a nice cracked crown and looked puffier. The inside was more dense and melty as opposed to mousse-like as well.

Four were a perfect amount for my family of two adults and three kids, but if we were expecting company I would double the recipe. I agree that this would be the perfect fall pre-holiday treat, but since it’s already getting pretty warm here in Texas I don’t think I’d make it again until the end of summer.

Next up: Classic carrot cake with cream cheese frosting! Now that’s perfect for this time of year, can’t wait!!